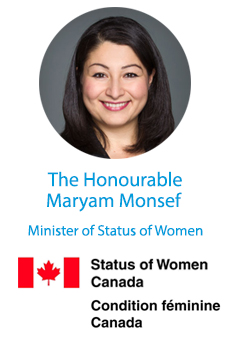 Maryam Monsef is a dedicated community organizer, former Peterborough mayoral candidate, and co-recipient of the YMCA’s Peace Medallion. She served as Minister of Democratic Institutions from November 2015 to January 2017.

Maryam is widely recognized as one of Peterborough’s most influential people and represented her city in 2013 at the United Nations Commission on the Status of Women. A passionate volunteer, Maryam has sat on the boards and committees of several high-profile organizations. She was the Vice-President of the YWCA of Peterborough and Haliburton Board of Directors, and a former director of the Ontario Public Interest Research Group, and of the New Canadians Centre—a non-profit organization dedicated to supporting immigrants, refugees, and other newcomers in the Peterborough and Northumberland regions. Maryam was the co-founder of the Red Pashmina Campaign, a grassroots initiative she started while at Trent University, which to date has successfully raised over $150,000 to help support women in Afghanistan.

Maryam has a Bachelor of Science in Psychology from Trent University, and speaks English, Farsi, and Dari.