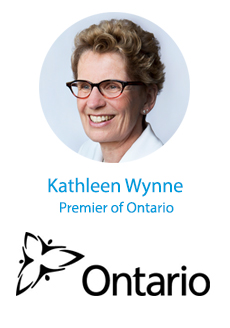 Since taking office in February 2013, some of Premier Wynne’s accomplishments include the largest infrastructure investment in Ontario’s history and completing the single-largest climate change initiative in North America by eliminating coal-fired electricity generation in the province. She also introduced a ground-breaking plan to stop sexual violence and harassment.

Premier Wynne’s economic plan for Ontario builds on her number-one priority: growing the economy and creating jobs. Her four-part plan invests in talent and skills, including helping more people get and create the jobs of the future by expanding access to high-quality college and university education. In addition to infrastructure investments in roads, bridges, transit, schools and hospitals, her plan is investing in a low-carbon economy driven by innovative, high-growth, export-oriented businesses. The plan is also helping working Ontarians achieve a more secure retirement.

Before becoming an MPP, Premier Wynne served as a trustee on the Toronto District School Board. Prior to that, she led citizens’ groups in a number of grassroots community projects and played a major role as an organizer and facilitator.

Premier Wynne has lived with her partner, Jane, in North Toronto for more than 25 years. She has three children and three grandchildren.