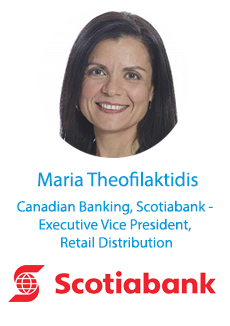 This is a thought-leading article about gender equality at Scotiabank, written by Maria Theofilaktidis, Executive Vice President, Retail Distribution, Canadian Banking, at Scotiabank. Scotiabank is one of GCNC’s Patron Supporters and a Gold Sponsor of The Gender Equality Forum 2017.

Gender equality has been front-and-center recently in global news. The Women’s March on Washington on January 21 in the U.S. spurred a total estimate of 673 sister marches around the world with more than 4.9 million people participating from all seven continents, according to its website. Gender equality is on the global stage.

Yet, we all know that there are still many barriers in place, and discrimination against women persists, directly and indirectly, even in countries where equality is guaranteed by constitutions. While there has been some progress, on average women in the labor market still earn 24 percent less than men globally, according to 2015 data from UN Women. Worldwide, 35 percent of women have experienced either physical and/or sexual partner violence or non-partner sexual violence, according to a 2013 report by the World Health Organization.

We believe that gender equality is a foundational component of the kind of world we want to live in. It has social and economic implications – as a bank those things are very important for us.

Gender equality is an issue that I’m personally passionate about. I was one of four daughters of working-class, Greek-Cypriot immigrants, and I hit my fair share of glass ceilings in my lifetime. There were times I walked into a meeting and the people attending would talk to the young man on my right or my left because they assumed that he was my boss. But despite this, I was lucky to have the opportunities I’ve had and I was fortunate to have worked with some forward-thinking leaders that supported and empowered me throughout my career.

My colleagues at Scotiabank have been some of these forward-thinking leaders. I sit on the Global Inclusion Council at Scotiabank, where I’m the Executive Champion for Scotiabank Women, and I’m very proud of the leadership that Scotiabank has shown in a traditionally male-dominated industry. We believe that gender equality is a foundational component of the kind of world we want to live in. It has social and economic implications – as a bank those things are very important for us.

Our company is dedicated to a diverse and inclusive environment, where every employee can perform at their very best. This means actively addressing factors such as unconscious bias in all forms, including bias related to women. One way we are doing this is by offering educational resources such as unconscious bias training to our  employees. The workshop introduces managers to blind spots that they might not be aware of which impact how we hire, promote and make decisions.

Another one of Scotiabank’s workplace initiatives to promote gender equality is our “HeForShe” movement (modeled after a solidarity campaign originally created by UN Women). Male leaders at our company talk publicly about the actions they take personally to help empower women, and challenge gender bias  when it comes to women in the workplace.

At Scotiabank, we believe that one of the foundational pieces for the future is the full engagement of young people in our communities, including a broadened role for girls.

At Scotiabank, we believe that one of the foundational pieces for the future is the full engagement of young people in our communities, including a broadened role for girls.  Our company has committed to building more resilient communities by focusing on the health, well-being, and education of young people. Thriving girls in particular lead to a thriving broader society because they grow up to be the women that form the pillars of families and society.

To deepen our understanding of the current status of youth in communities, we’ve also embarked on efforts to better measure the health and education of youth in our regions by partnering with an international advisory council of leading external experts on youth issues. From the discussions and research so far, it’s clear that gender plays a role in the well-being of young people and that we need better data to understand the details of this complex interplay. We look forward to continuing to work with organizations in this space to encourage the publication of more data and information so that everyone can make better, more informed decisions about how to invest in girls across the globe.

All of this is progress, and I’m proud that Scotiabank is making efforts to not only change the status quo at the Bank, but influence change for girls, our future leaders. I hope that our work will inspire more corporate champions to join in the effort.